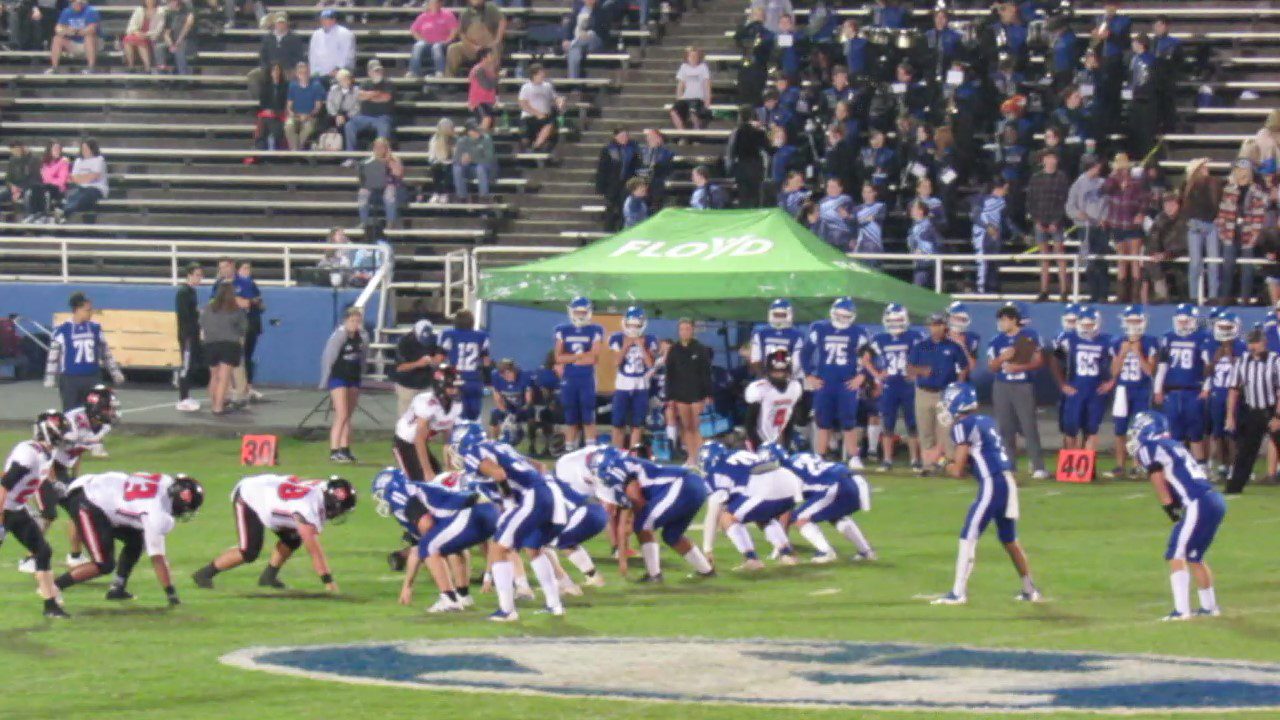 H.A. Lindsey Stadium hosted  Youth Football Night pregame on Friday, & the young Indians were in for a show. The Indians converted  5 turnovers into 4 scores and Junior QB Chandler Desanto had a breakout game scoring 4 TDs in a 45-7 win over the Bearcats from Weaver, Alabama.

Armuchee started the scoring early. The Bearcats were forced to punt on their first possession the Indians took over near midfield. After several short yard gains by Senior Alex Wright, Desanto kept the ball for a 35 yard run down to the 5 yard. Two plays later Sophomore Ryland Steen would give the Indians their first TD on the night with a 4 yard run up the middle. Sophomore K Grayson Perry added his 1st of 6 XPs on the night to put the Indians up 7-0 with 4:32 left in 1st Q.

After a touchback Weavers next possession began at their own 20. On the second play of the drive the Bearcats tried to throw deep across the middle. Armuchee Sophomore Jacob Seagraves made a leaping interception to set the Indians up with good field position at the Weaver 29.

On a 3rd and 13, Desanto found Senior Malik Drinic in the back of the end

The Indians responded quick. After the attempted onside kick by Weaver, recovered by Senior Riley Ross, Armucee took over on their own 46 yard line. Wright took the handoff on the 1st play of the drive 54 yards up the left sideline to put the Indians ahead 21-7 with 9:36 left in the 1st half.

After several change of possessions with a Weaver punt, Indian fumble, and a Weaver punt Armuchee took over at their own 18 with 1:30 left in the half. On the third  play of the drive  Desanto scored on a 69 yard keeper to give the Indians a 28-7 lead at the end of the 1st half.

Weaver came out ready to play in the 2nd half catching the Indians with an onside kick to open the 3rd Quarter. After a 7 play drive that took the ball to the Indian 30, Sophomore Ryland Steen came up with a drive stopping interception and after a 20 yard return the Indians took over at midfield.

The Indians were able to get the ball down to the Bearcat 7 yd line after a 45 yd completion from Desanto to Senior JJ House but the drive stalled and the Indians settled for a 35 yard FG from Perry to go up 31-7 with 6:57 left in the 3rd Q.

Two Weaver possessions later Senior Riley Ross would come up with the Indians 3rd interception of the night. Ross returned the ball to the Bearcat 9 yard line leading to a Desanto 8 yard TD run putting the Indians up 38-7 to end the 3rd Q.

The Bearcats fumbled on the first snap of their next possession, recovered by Steen at the Weaver 32 yard line. 5 plays later Desanto would find JJ House on 21 yard TD throw to cap the scoring at 45-7. Sophomore Jackson Coonley would add the Indians 4th interception of the night late in the 4th.

The Indians will open Region play next week when they host the Mount  Zion Eagles.