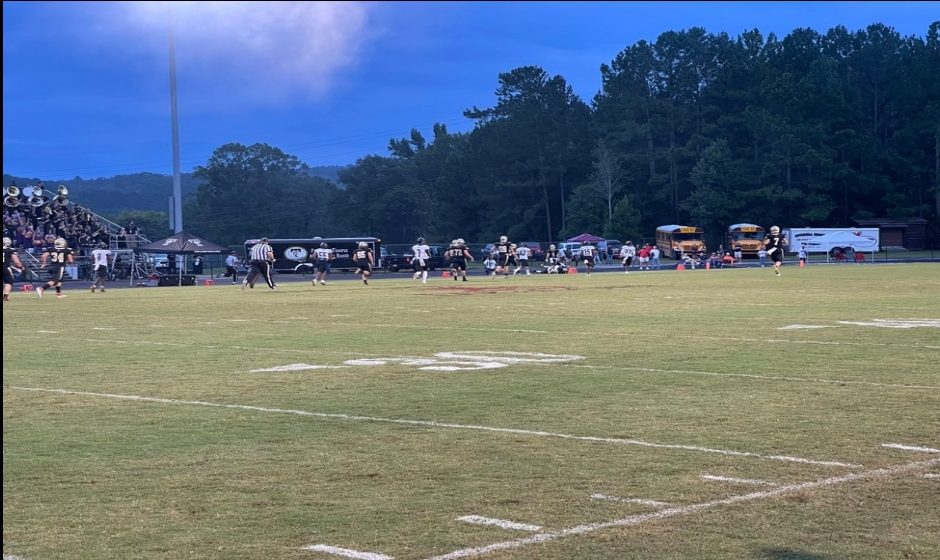 Friday September 17th the Pepperell Dragons hosted the Temple Tigers in their last game before the start region play. Both teams were looking to notch their first wins of the season.

Pepperell received the opening kickoff, and it took Dj Rogers and the Pepperell offense just under 2 minutes to punch one in. Pepperell jumped up earl 7-0 against the Tigers.

On the Tigers first drive of the game they went 3 and out and had to punt it away.

Pepperell once again found their way to the redzone for their second straight drive but this time the Temple defense denied them from paydirt, and they had to settle for 3. Pepperell now led the Tigers 10-0 with 5 min left in the first quarter.

Temple’s defense ended the 1st quarter on a good note with their defense storming the backfield and gaining what little momentum they could.

It took less then 3 minutes for Temple to answer with their first score of the game coming off a 7-yard passing touchdown. Temple finally got on the board with 6:30 left in the 2nd half.

At the half Pepperell was up 17-7 on the Tigers. Both teams looked very good with the defense of Temple looking good but the Dragons hitting on all cylinders.

After both teams stalled out on Temple’s 2nd drive of the 3rd quarter Vic Edwards was able to punch it in with a run up the middle. Now Pepperell was hanging on to a field goal lead 17-14 with 2:15 left in the 3rd.

The Pepperell offense came into their next drive fired up. After only a minute and a half Dj Rogers took in his 2nd rushing touchdown of the night. The Dragons now had a 24-14 lead heading into the 4th quarter.

The very next drive Temple’s Vic Edwards once again took it in for a rushing touchdown to give him 2 on the night however Pepperell’s defense came up big and blocked the field goal to make it a touchdown game instead of a field goal game. Pepperell now up 24-20.

After a stalled drive the Tigers took over possession a little over 3 minutes in the game. Pepperell defense coming off a field goal blocked then forced a huge fumble on 2nd and long to take back possession with 1:44 left in the game.

The Dragons lined up in victory formation to finish off the game.

Pepperell improved to (1-3) on the year with their next game being a region game as the travel to Dade County (2-1). The Temple Tigers will also be traveling to the Best Eagles (1-2) still searching for their first win of the season.