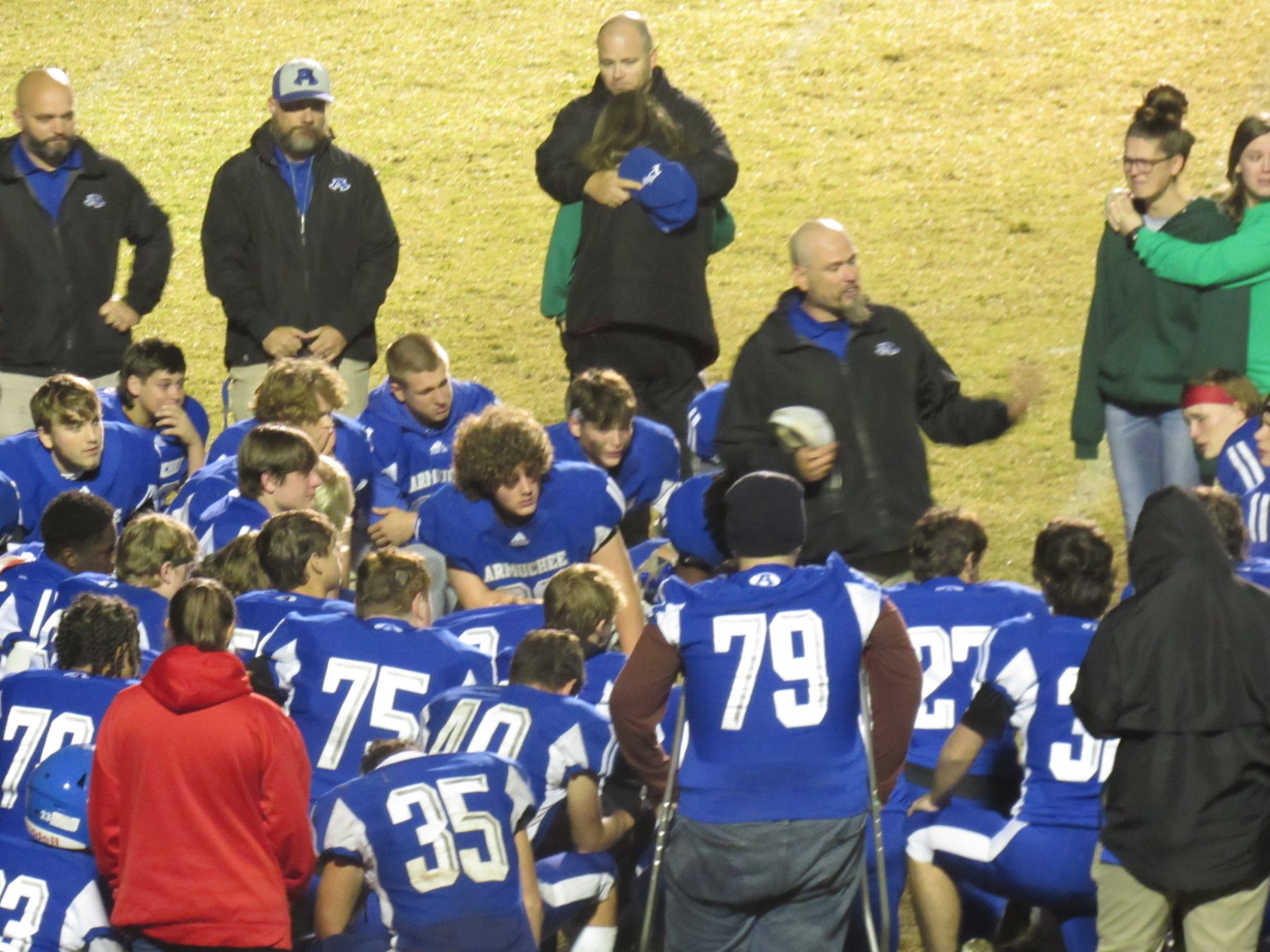 It was a very emotional Senior night at H.A. Lindsey Stadium in Armuchee Friday night. The Armuchee Indians and the Gordon Lee Trojans squared off in a head to head battle with the winner clinching the final playoff spot in 6A Public. It was a hard fought game with the visiting Trojans holding on for a 16-14 win.

Both teams traded punts on their opening possessions of the game. Gordon Lee went to work on their 2nd possession. A face mask penalty on the 1st play gave the Trojans good field position at the Armuchee 47. In 12 plays they were able to move the ball inside the Indian 10 yard but a 6 yard tackle for loss by Sophomore Jessie Smith forced Gordon Lee to settle for a 29 yard field goal to take a 3-0 lead with 1:06 left in the 1st Quarter.

Armuchee put together a 13 play 80 yard drive on their opening drive of the 2nd Q. Senior RB Austin Stacy and Junior QB Chandler Desanto accounted for 75 yards of the drive on the ground. Stacy would take the hand off and plow ahead for a 9 yard TD to give the Indians a 7-3 lead with 6:09 remaining in the 1st half.

Gordon Lee answered back quickly with a 71 yard 8 play drive of their own, all on the ground. The Trojans would score  on a 27 yd TD run and retook the lead at 10-7 with 2:38 remaining before halftime.

The Indians received the 2nd half kickoff. Starting at their own 20 they used 15 plays, including a 4 and 1 conversion from Sophomore Ryland Steen, to march the ball to the Gordon Lee 27. Gordon Lee came up with 2 big stops on defense on 3rd and 4th down and Armuchee was forced to turn the ball over on downs with 5:39 remaining in the 3rd Q.

The Armuchee defense stepped up and forced Gordon Lee to punt. Armuchee took over at their own 30 with 2:30 to play in the 3rd Q. After several positive run plays the Indians would commit their only turnover of the night coughing the ball up near midfield. Gordon Lee would take advantage of the fumble and go 50 yards in 5 plays, capped off by a 16 yard TD run. The extra point was no good and the Trojan lead was 16-7 with 10:30 min left in the game.

The Indians would put together a 13 play 71 yard drive on their next series that included 2 big 4th down conversions. One was a 4th and 12 from their own 48. QB Chandler Desanto was being chased out of the pocket and heaved the throw downfield. Senior Kameron Parker leaped up between two defenders and brought the catch down at the Gordon Lee 15 yard line. Desanto would eventually take the QB keeper in from the 1 yard line to cut the lead to 16-14 with 3:24 to play.

The home fans felt like there may be some magic in the air this night as the Indians lined up for the onside kick. The kick bounced around but the Trojans were able to bounce on the loose ball at their 35 yard line. The Indians used their timeouts and all Gordon Lee needed was one first down to end the game. On a 3 and 8 the Gordon Lee RB looked like he was caught behind the line of scrimmage but he reversed direction and broke free for a 38 yard gain. They were able to run out the clock and secure the 16-14 win and a spot in the GHSA State Playoffs.

After the game Coach Green met with the Indians in the endzone and announced that he would miss the rest of the season as he begins radiation treatment for throat cancer on Monday. In a classy move the Gordon Lee Trojans wore green socks and the cheer team sported green bows in support of Coach Green’s battle.