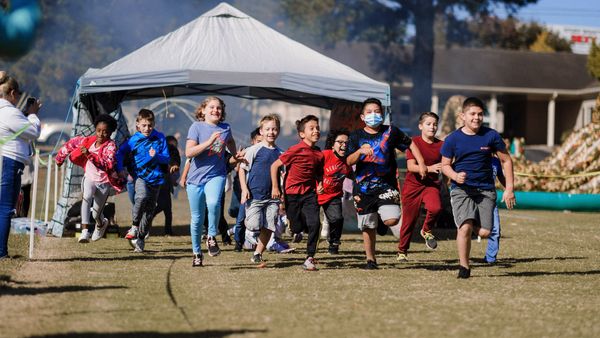 ROME, GA— West End Elementary School put the “fun” in fundraising, as excited students participated in the PTO Spooky Sprint on Tuesday, November 2.
What once was a sprint became a fun-filled obstacle course that took up the whole field at WEE. Since the event was originally scheduled to take place the Friday before Halloween, but was rescheduled due to rain, the obstacle course had a spooky Halloween theme throughout.
Monster mash played through speakers on the field, signaling the start of the sprint. Students raced through a foggy strobe light tent, and dropped down to crawl through spider-webbed tunnels. Next, they jumped up to zig zag through a hay bale maze, followed by a witch’s hat maze, and then through a cluster of spooky hanging ghosts. Parents, peers, and faculty cheered the students on as they ran the course; everyone wearing big smiles.
As students rounded the corner, on the last stretch, they passed through a creepy graveyard and onto a huge inflatable slide. Upon their last round of the course, the students were surprised with bursts of silly string, seemingly out of nowhere, as they passed under a towering spider’s web.
WEE Principal Dr. Dennis Drummond explained that the event is put on in efforts to raise money for the PTO by asking the students to get pledges.
“All of the students who raised at least $10 in donations got to participate,” he explained, “and then we had different prizes as they brought in more funds.”
Spooky sunglasses, glow in the dark teeth, a pizza party, and an ice cream party were among the other prizes. “One of the things they love to do is limo lunch,” Drummond said. “We take our top fundraisers on a limo lunch downtown to Mellow Mushroom and Honey Moon Bakery. That’s always fun.” 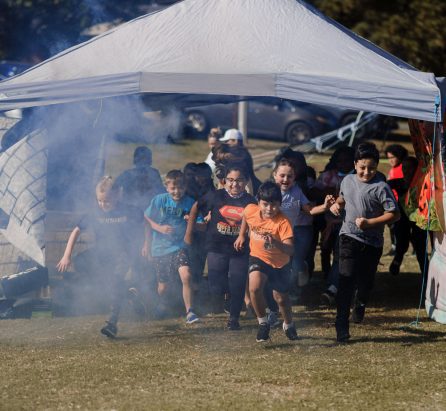 Certainly though, each student strives to raise the most funds, as that student gets to be principal for a day.
“It’s fantastic,” Drummond smiled. “It gives me a day off. We do that on the Friday before Christmas break, and they just kind of shadow me throughout the day. They get to make announcements and help me in the cafeteria.”
Drummond said that Melanie Matteo, PTO president, was instrumental in putting the event together.
“It was a lot of fun to get creative and put this course together,” Matteo smiled.
As a mother of four, she said that she feels passionate about creating fun, safe opportunities for the kids to just be kids. “I always say that you never know what a kid goes home to, and so being here and providing a safe environment for them really makes you feel so good.”
Matteo gave a shout out to her PTO team of dedicated parents that helped make the Spooky Sprint a total success.
“This is a really fun event,” Drummond said. “It gets our kids some exercise, it gets us outside and raises a lot of money. I think we raised over $8,000, and that goes right back to our kids and our teachers.”
The Kona Ice truck was on site to offer cool colorful treats, and the students were also offered snacks and drinks after running the course.
The students were brought onto the field in groups so as not to create too much of a crowd.
“We’re back in Phase One,” Drummond explained, “which we’re really excited about, but we still need to keep safety in mind and so we’re having the kids come out by grade levels and then run the course as a class.”
Drummond said that for four years they did a color run, and decided to try something different this year. “The kids love it, they love the obstacles. They said that next year they want to do obstacles and color,” he said.
Drummond expressed gratitude for Nick Bridges and the Rome High School Cross-Country team as they came out to help set up the track and donated Gatorade for the kids.
He added with a smile, “We’re very thankful for very involved parents and great support from our high school family.”
Floyd County PTO Spooky Sprint Rome Ga Sppoky Sprint Event West End Elementary School